Earlier this summer I had the opportunity to check off an item on my bucket list and visit the very special Machias Seal Island Migratory Bird Sanctuary. This place is home to several bird species including Atlantic Puffins and Razorbills. A seal colony is also at the location.

(Click on the images to see a larger version)

Where Exactly is Machias Seal Island?

This 18-acre island is located about 18 kilometres (10 miles) southwest of Grand Manan Island, New Brunswick, and southeast of Cutler, Maine. I guess you could say the island is pretty much situated where the Bay of Fundy meets the Gulf of Maine.

Machias Seal Island is a designated migratory bird sanctuary, and it is managed and maintained by the Canadian Wildlife Service.

The island is in disputed territory between Canada and the USA, and so are the waters surrounding it. The Canadian Coast Guard owns and operates the lighthouse that is on the island. There are 2 Canadian lighthouse keepers who live on the island at all times as a way to keep "ownership" of Machias Seal Island.

Getting To Machias Seal Island

Getting to this island is not easy, and access is very limited. Access is very restricted. Only two tour operators have permits to bring visitors to the island: One in the US, and one in Canada. Each operator is normally allowed to bring a maximum of 15 visitors to Machias Seal Island per day, and with borders being closed due to COVID-19, my only option of course was to book my spot through the Canadian operator, Sea Watch Tours. which operate out of Seal Cove Harbour on Grand Manan Island.

Captain Wilcox greeted us in Seal Cove and provided us with a few instructions and introduced us to his first mate Durlan. The journey began on the Day's Catch, a 45' vessel that looks to me like it could have been a lobster fishing boat. My boating knowledge is very limited, so don't quote me on that. All I know is it wasn't a canoe!

Aside from the people taking the tour, the boat was also shuttling a few students who were going to the tiny remote island for a period of 6 weeks for a research project. So we were a total of about 20 people on the boat, but we were all very comfortable. Since we couldn't all be 6 feet apart from each other, we all wore a face mask, because these times call for it.

Attached to a rope and following us closely was the "Little Catch", the 16' skiff that the crew brought along in order to shuttle us from the main boat to the island.

The boat trip from Grand Manan to Machias Seal Island is about 90 minutes long. Along the way, we did spot a few whales at a distance, but they were very far and only surfaced for a very short period, so I couldn't get a photo.

Off the Boat and Onto Machias Seal Island

Once we got close to the Machias Seal Island, puffins and razorbills could already be seen swimming or flying over our heads. They really were all over the place, which was great! When we finally set foot on the island, we got a really close look at some puffins who were near us, just standing on the rocks.

We walked to our hiding spot, a small and cozy blind located at the center of the island. It really was an awesome spot to be, because no matter what direction you looked, you could see the ocean all around. Just goes to show how small this island really is.

Less than a minute after we got in the blind, the puffins had already forgotten about us and started approaching our hiding spot, sometimes so close that they would be about 2 feet from the blind (with some literally walking on top of us).

This is one of the blinds that visitors use to photograph the birds.

Bird Species on the Island

There are over 5,000 pairs of Atlantic Puffins on Machias Seal Island. There are a few other bird species that migrate here, including Razorbills, Northern Gannets, and a few others.

Seems like everyone was out there to see puffins, but these razorbills deserve just as much of the attention! In fact, I think I liked photographing them just as much as I did with puffins.

There are roughly 2,000 razorbill pairs on Machias Seal Island. These birds are an interesting species, and remind me a lot of penguins! (in fact, they are called "petit pingouin" in French, which means "little penguin".

They are a monogamous species, meaning that once they find their mate, they stick together for life. The female lays one egg per year, and the male and female take turns in taking care of the egg/chick while the other goes out fishing. 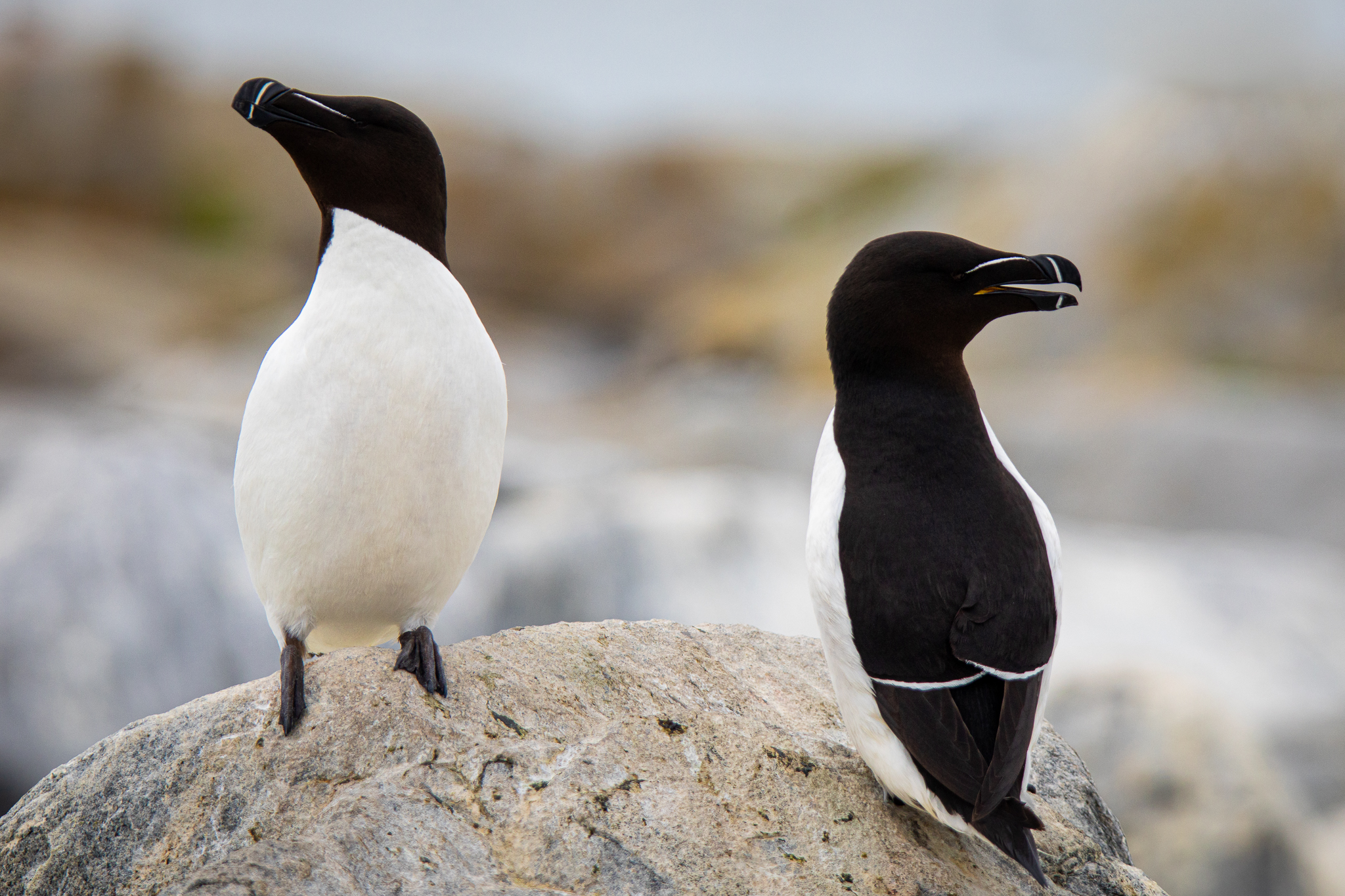 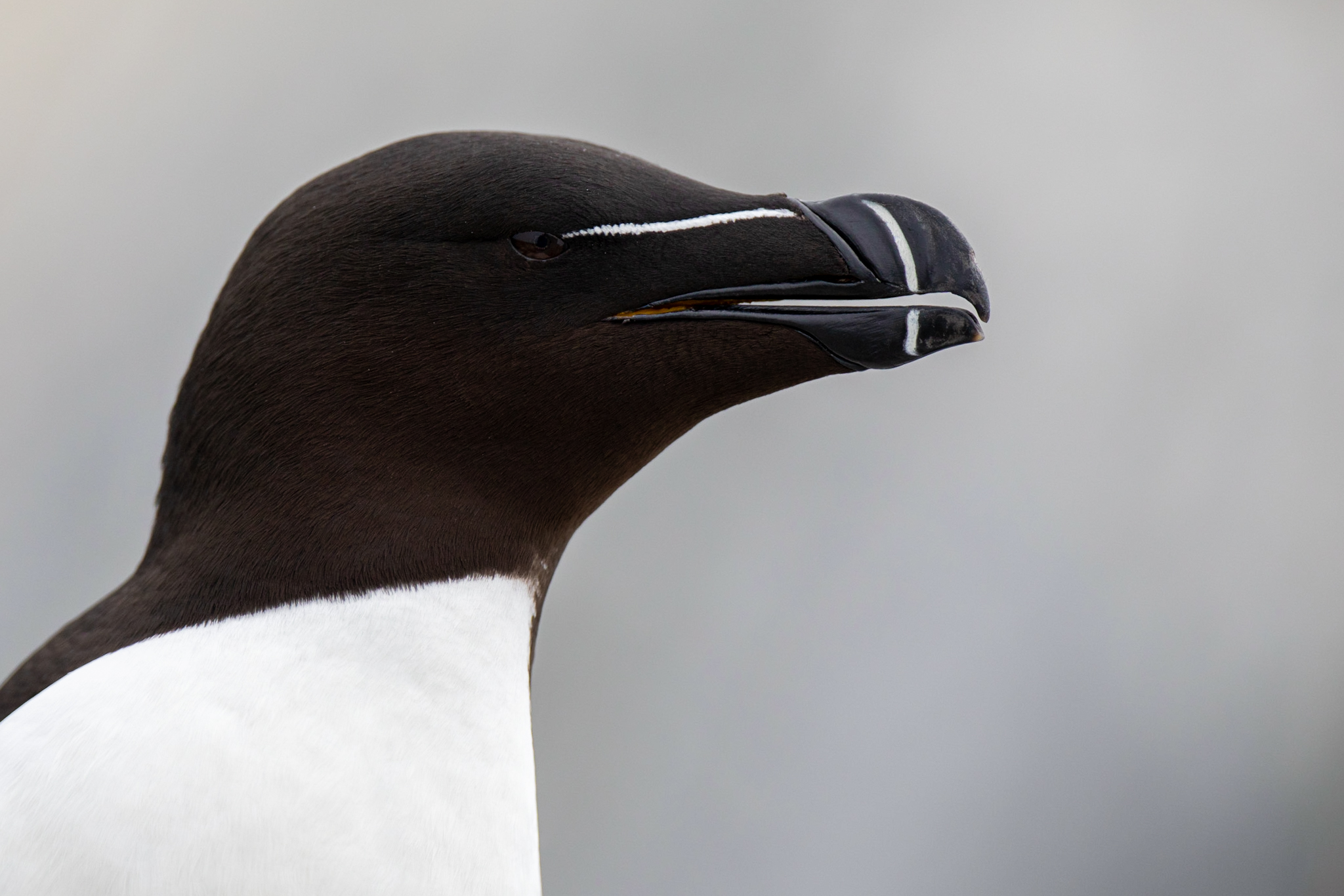 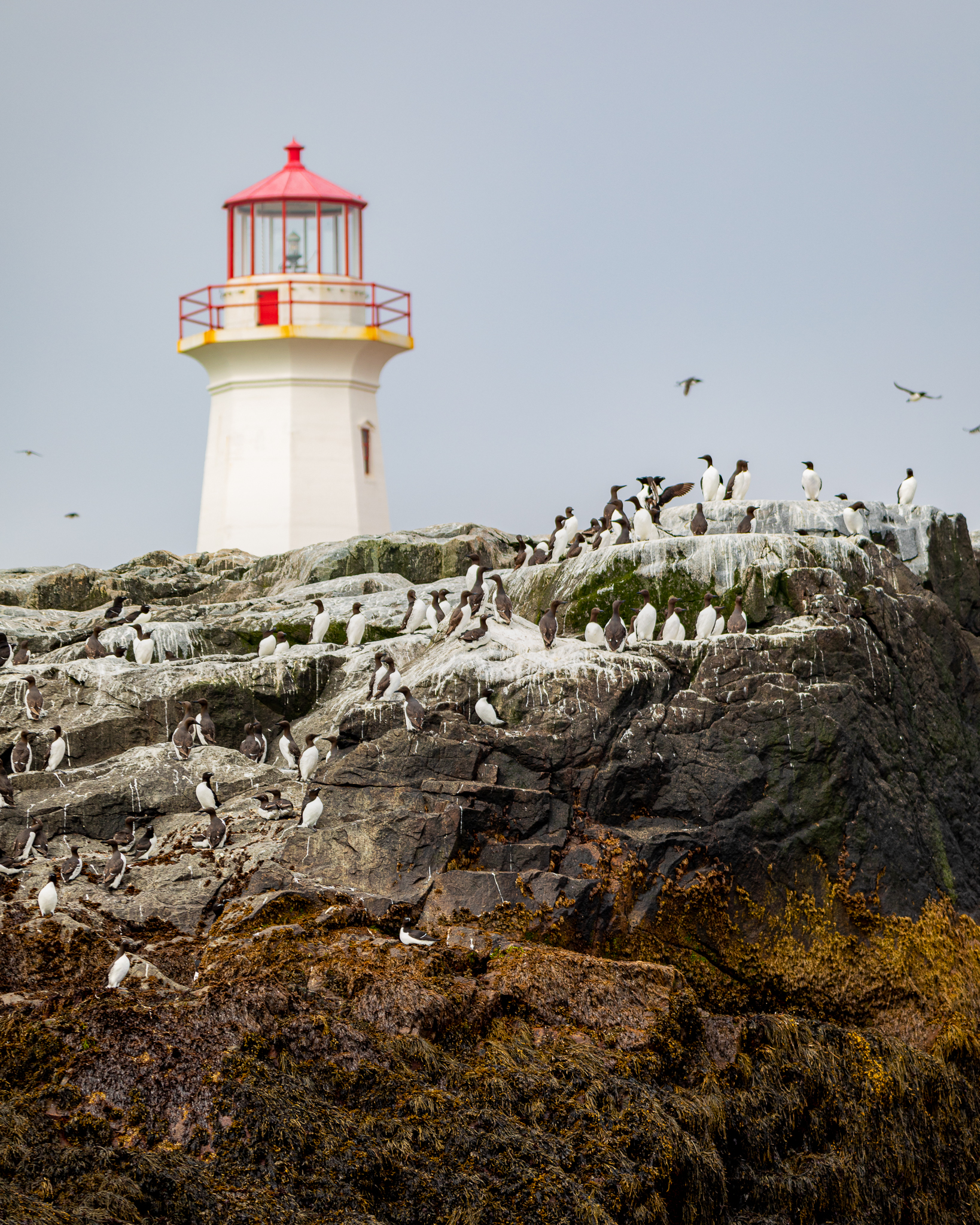 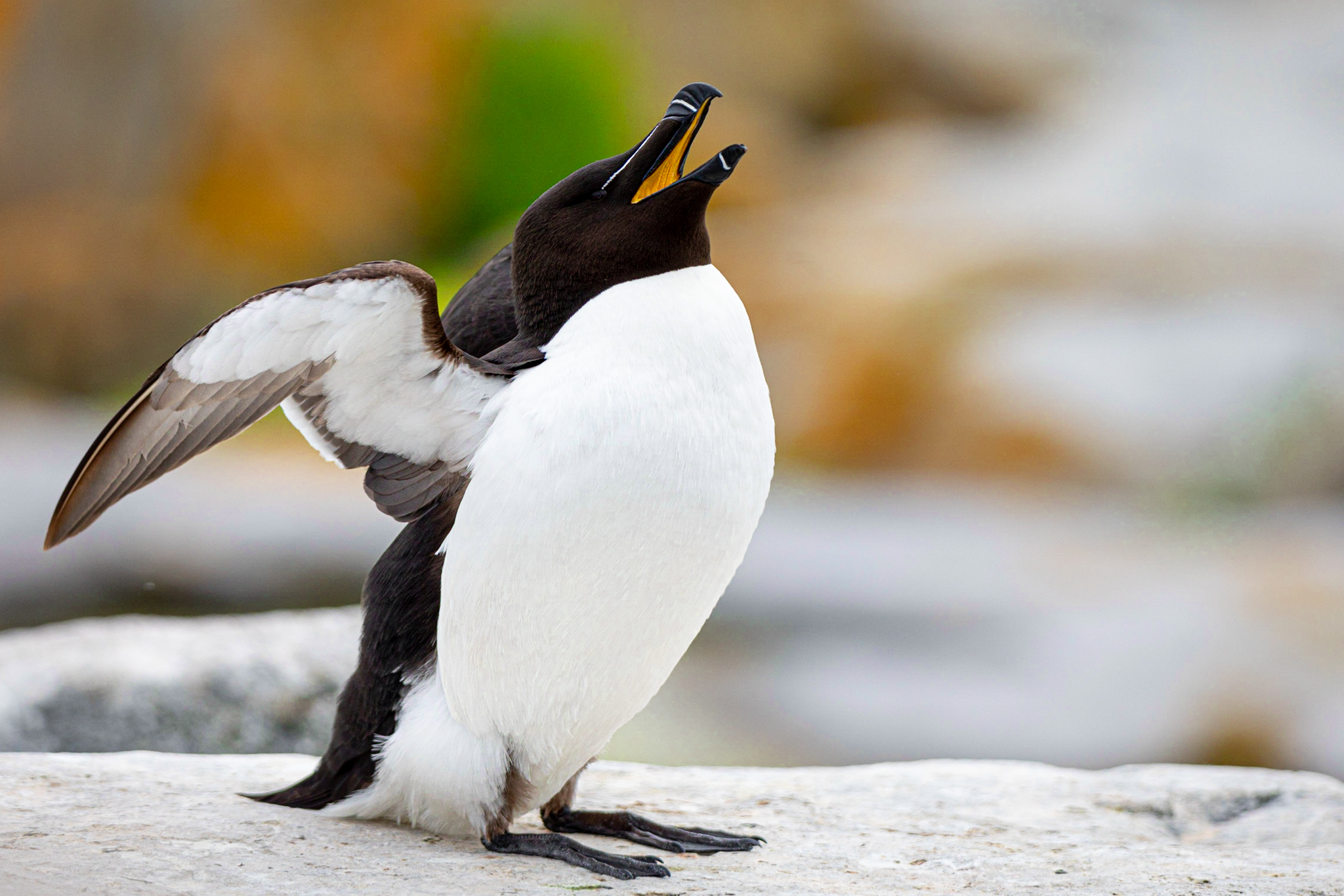 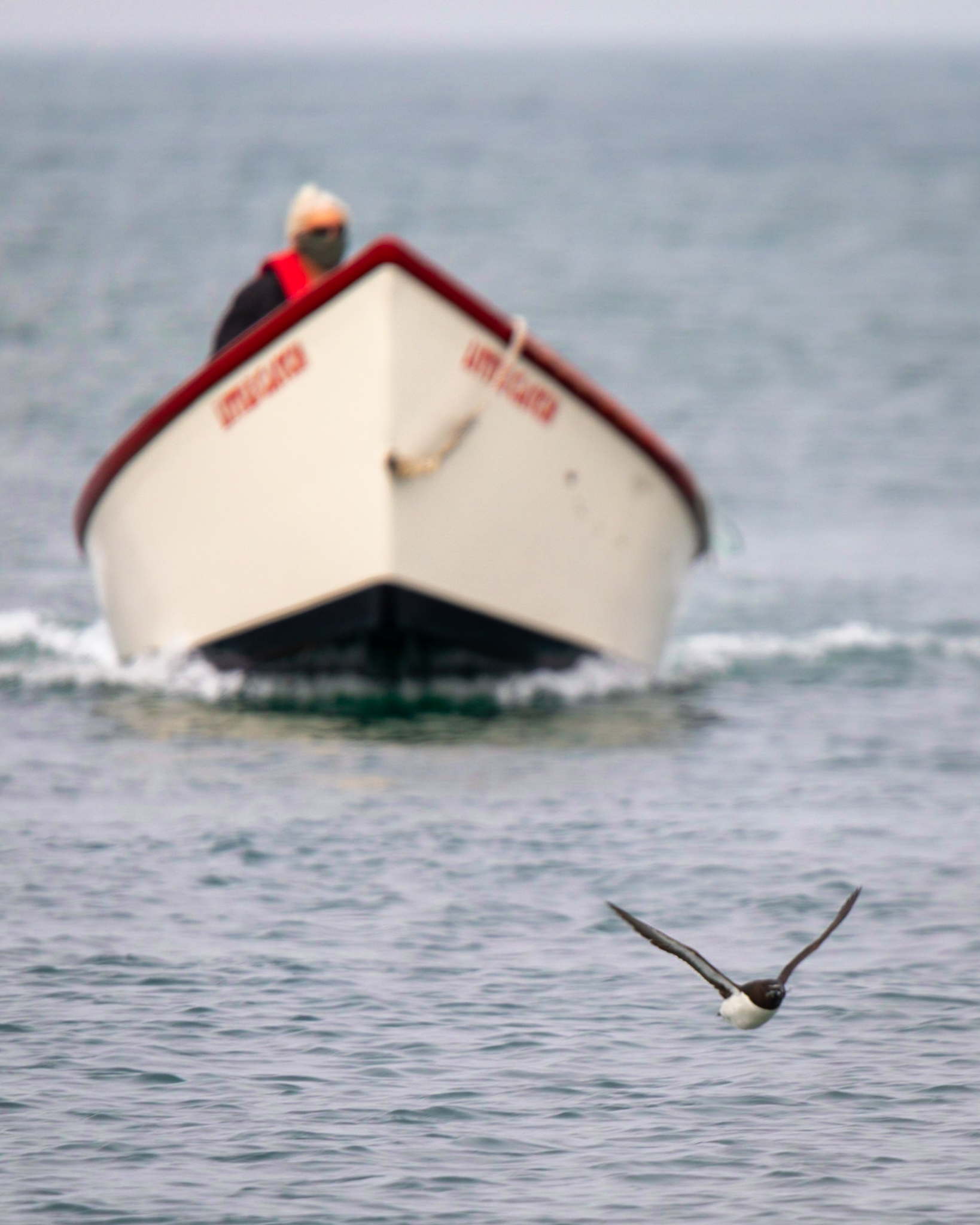 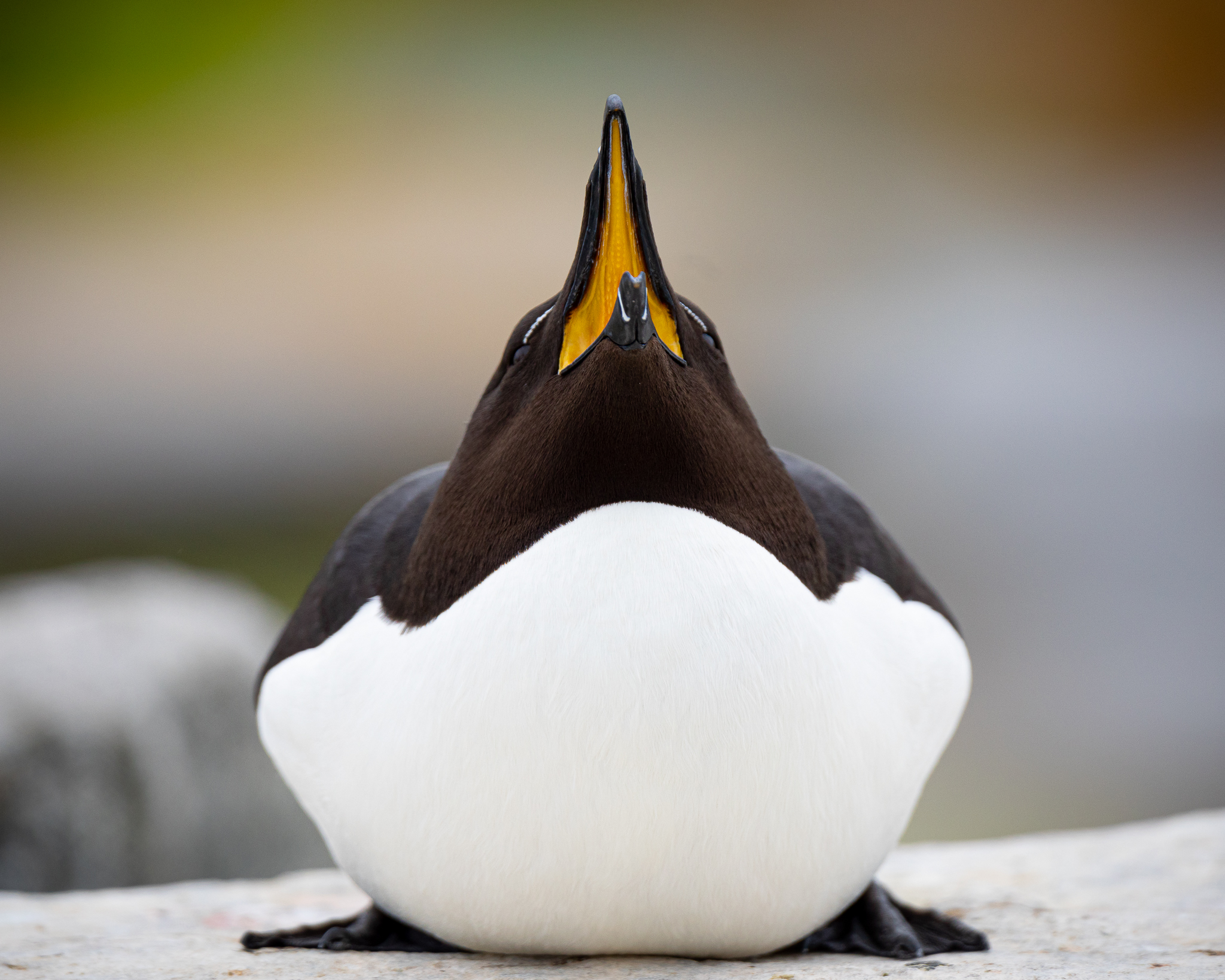 These are absolutely beautiful animals. They have a white body that gradually turns to gold from the neck up, with striking blue eyes. Apparently, there were only two northern gannets on the island when I was there. Just two!!! Fortunately, one of them happened to be not too far from the blind I was hiding in. Unfortunately, the few times that I got to shoot from the gannet's side of the blind, it would always turn its back to me, or hide behind a rock. I had a hard time getting a decent shot!

But just before leaving, I did manage to get one shot I was happy with, so at least I have that... But this left me wanting more gannet photos, so perhaps in a future trip I'll have more opportunities to see them and photograph them!

The start of the show here at Machias Seal Island is of course the Atlantic Puffin. A colourful animal and super cute due to its thick neck and short tail. They seem full of character and were not very camera shy, so photographing them was super fun! 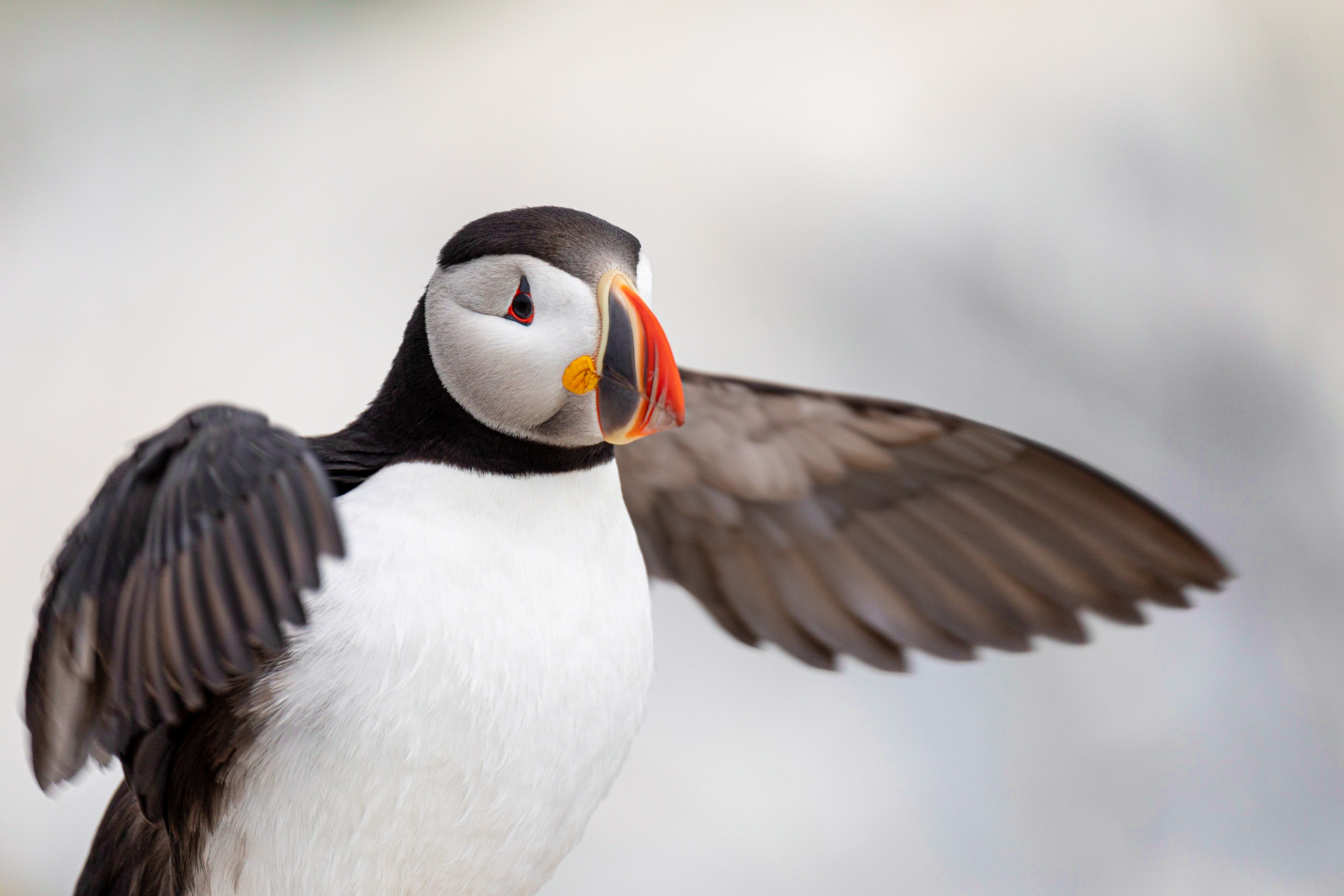 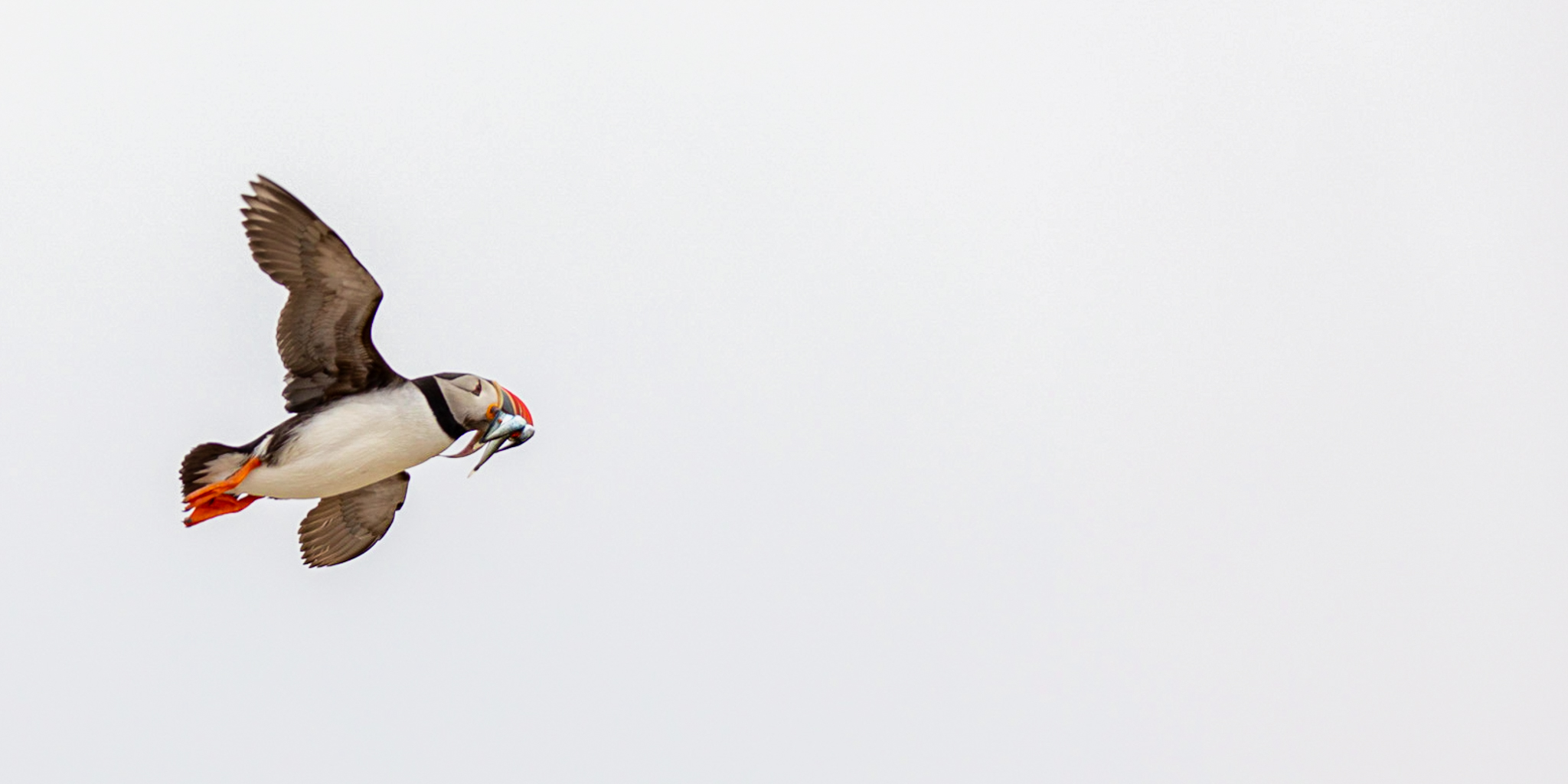 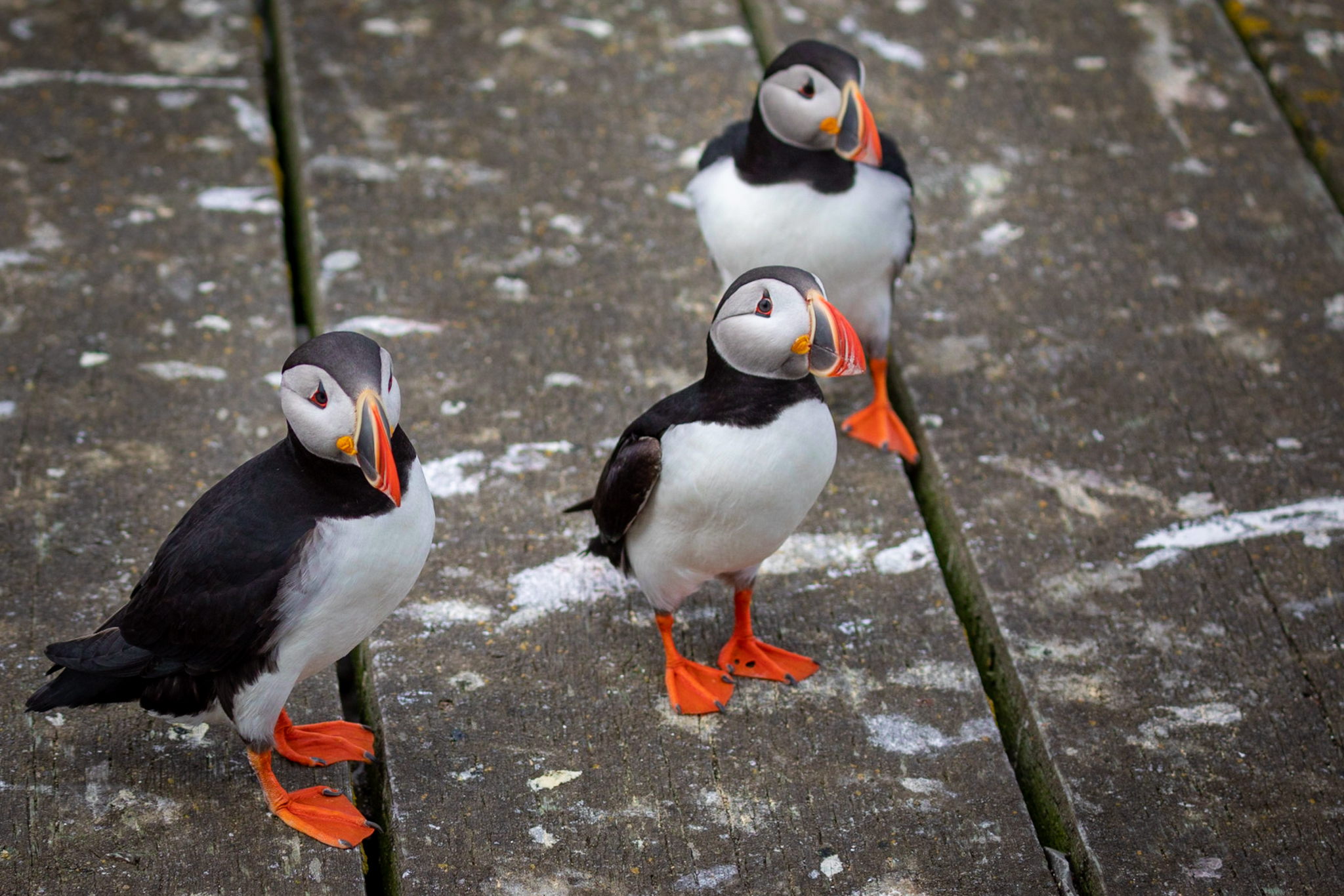 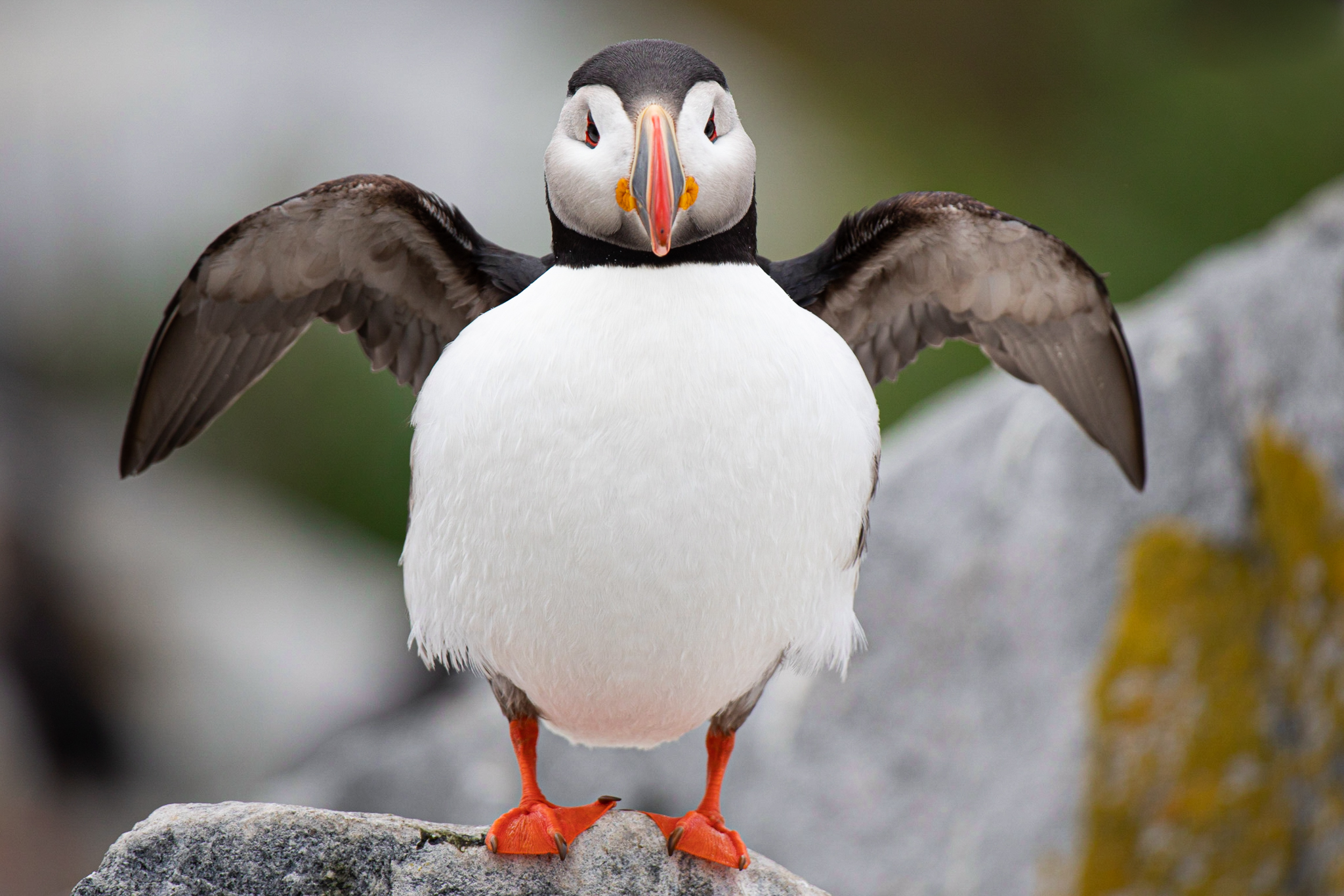 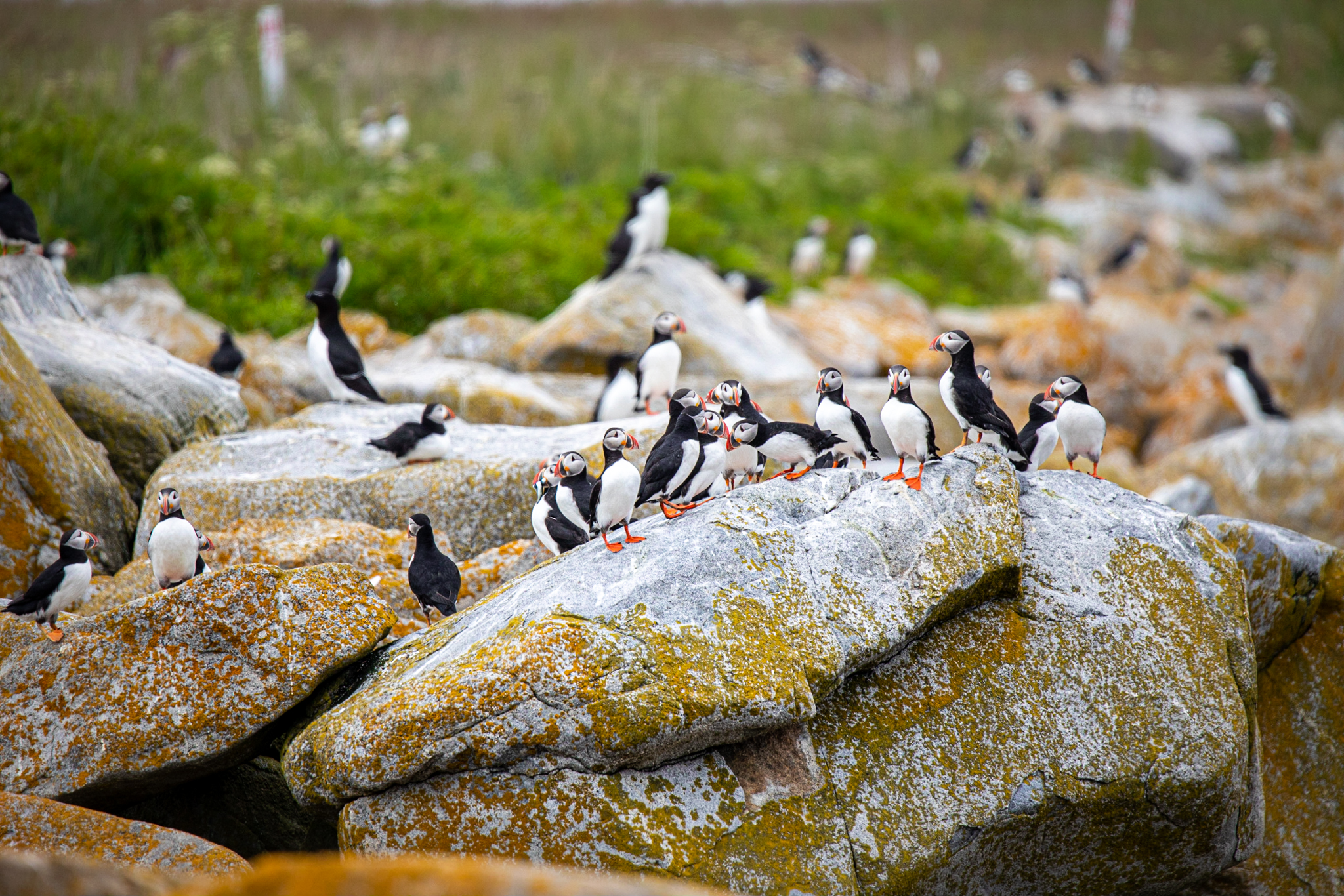 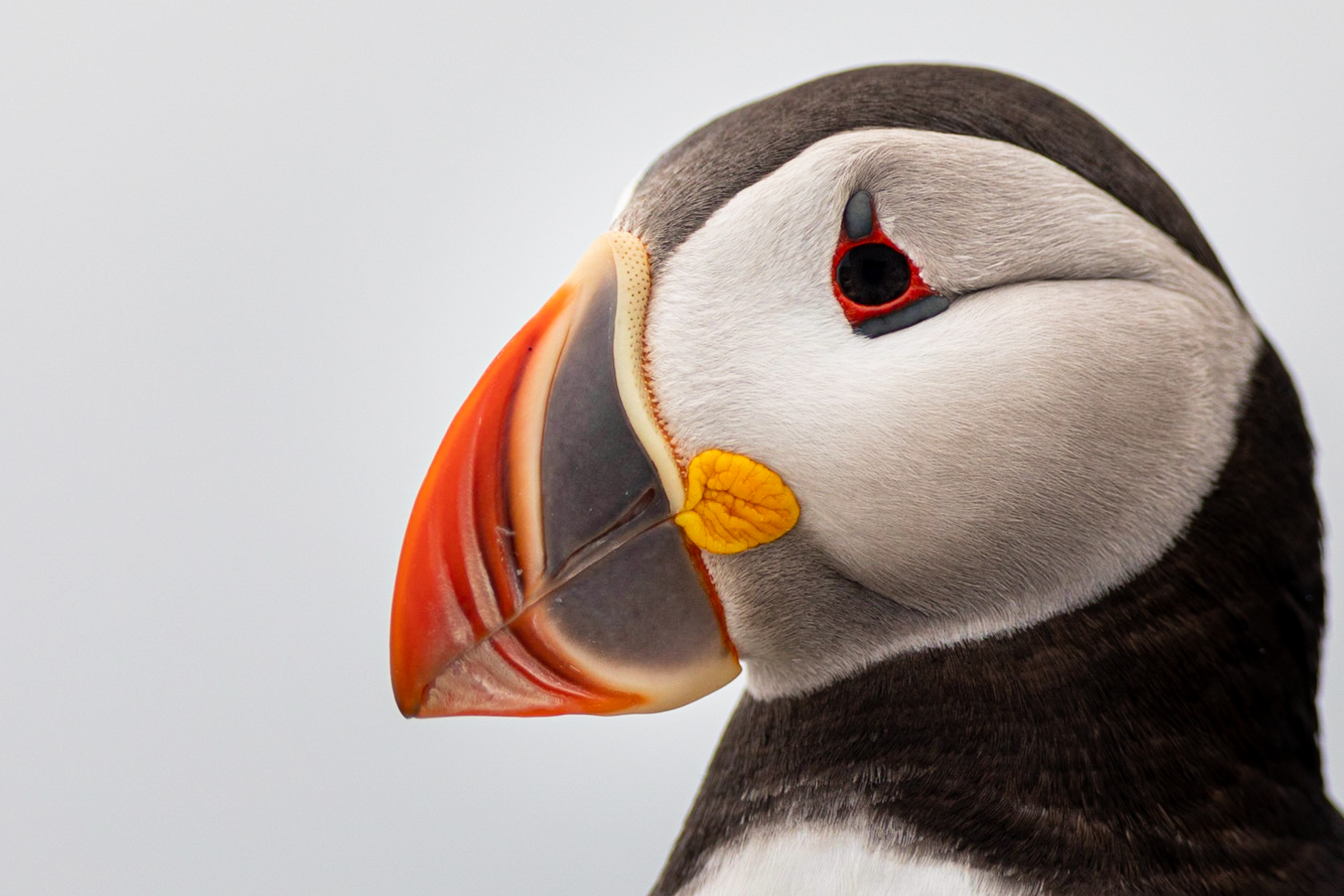 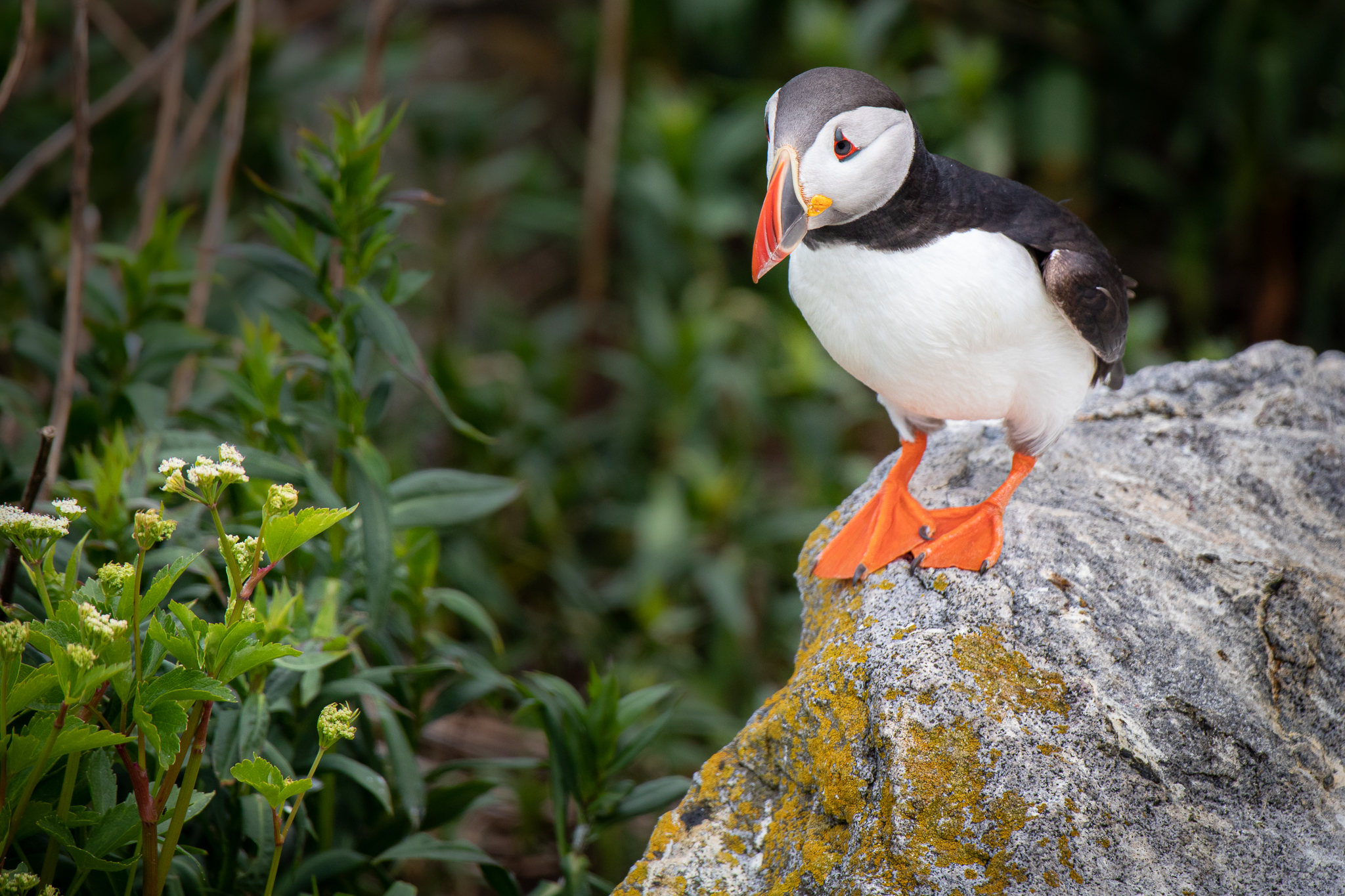 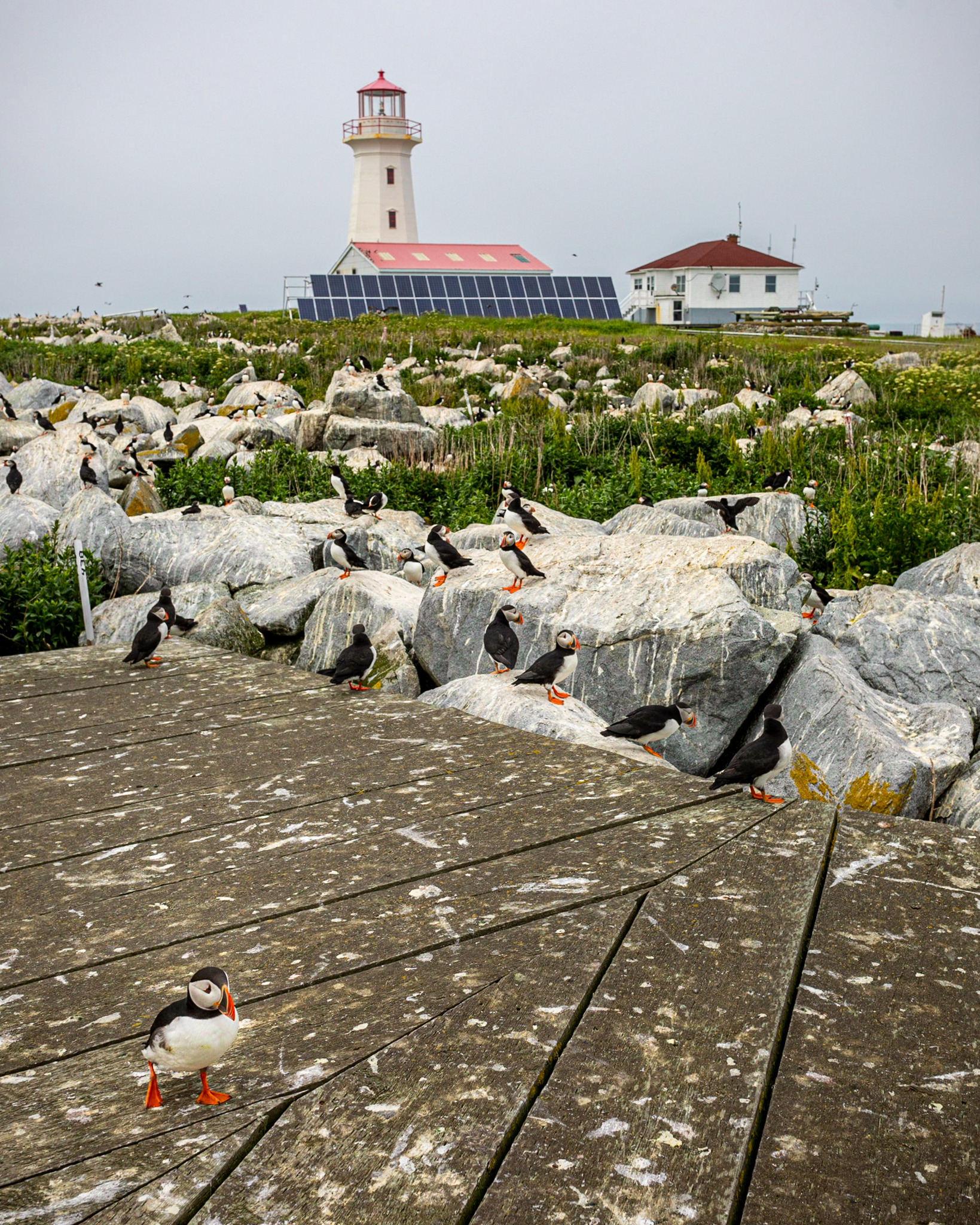 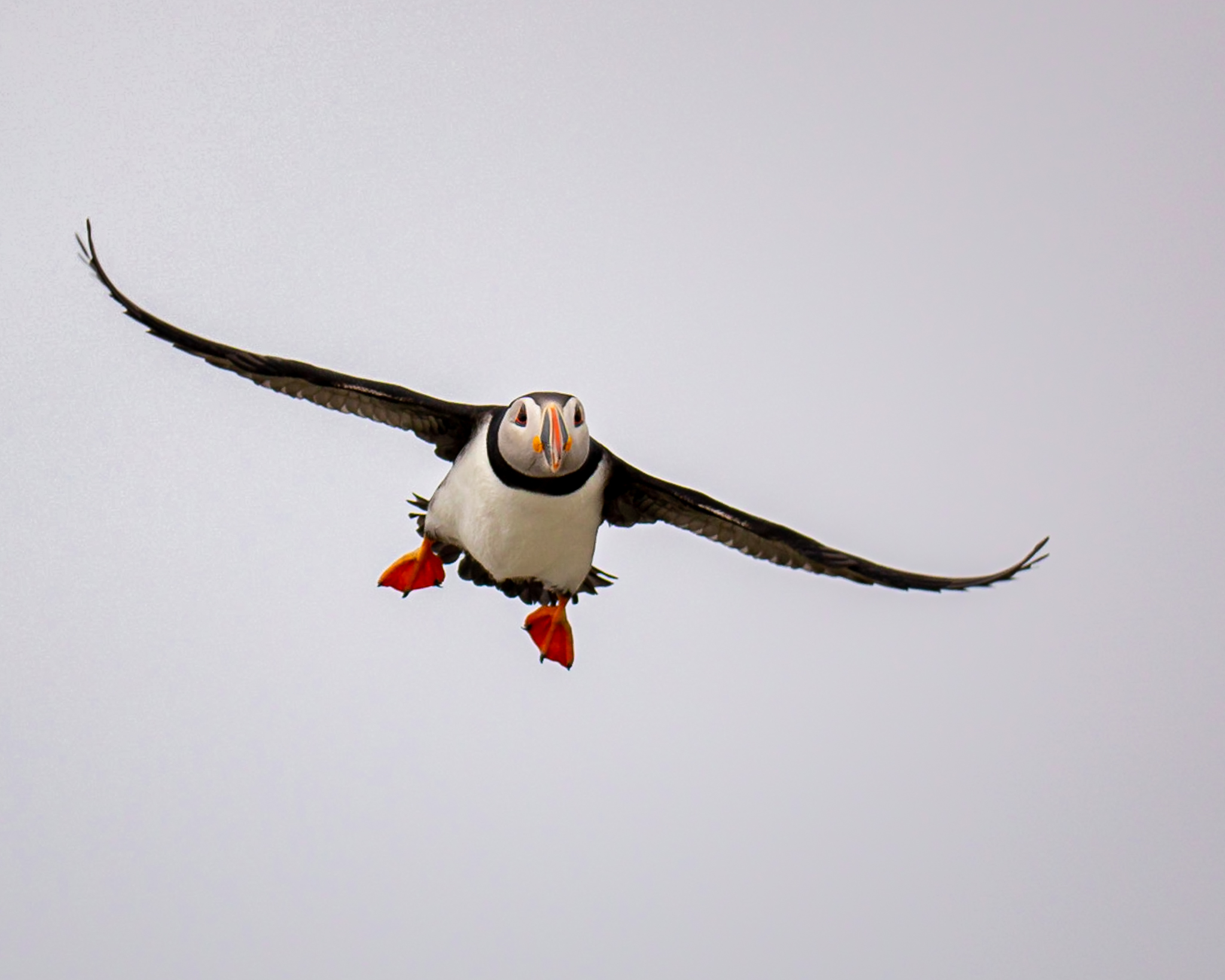 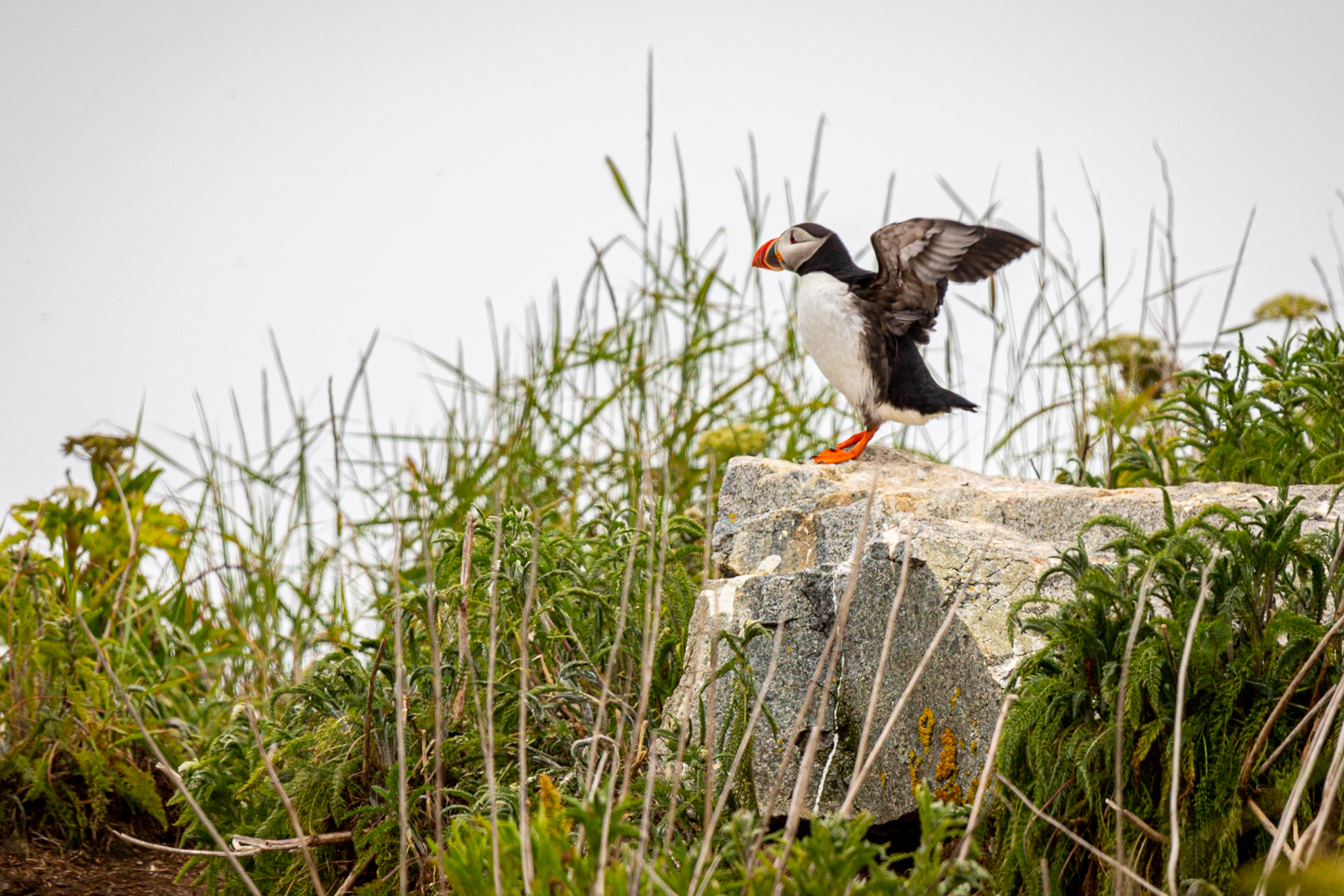 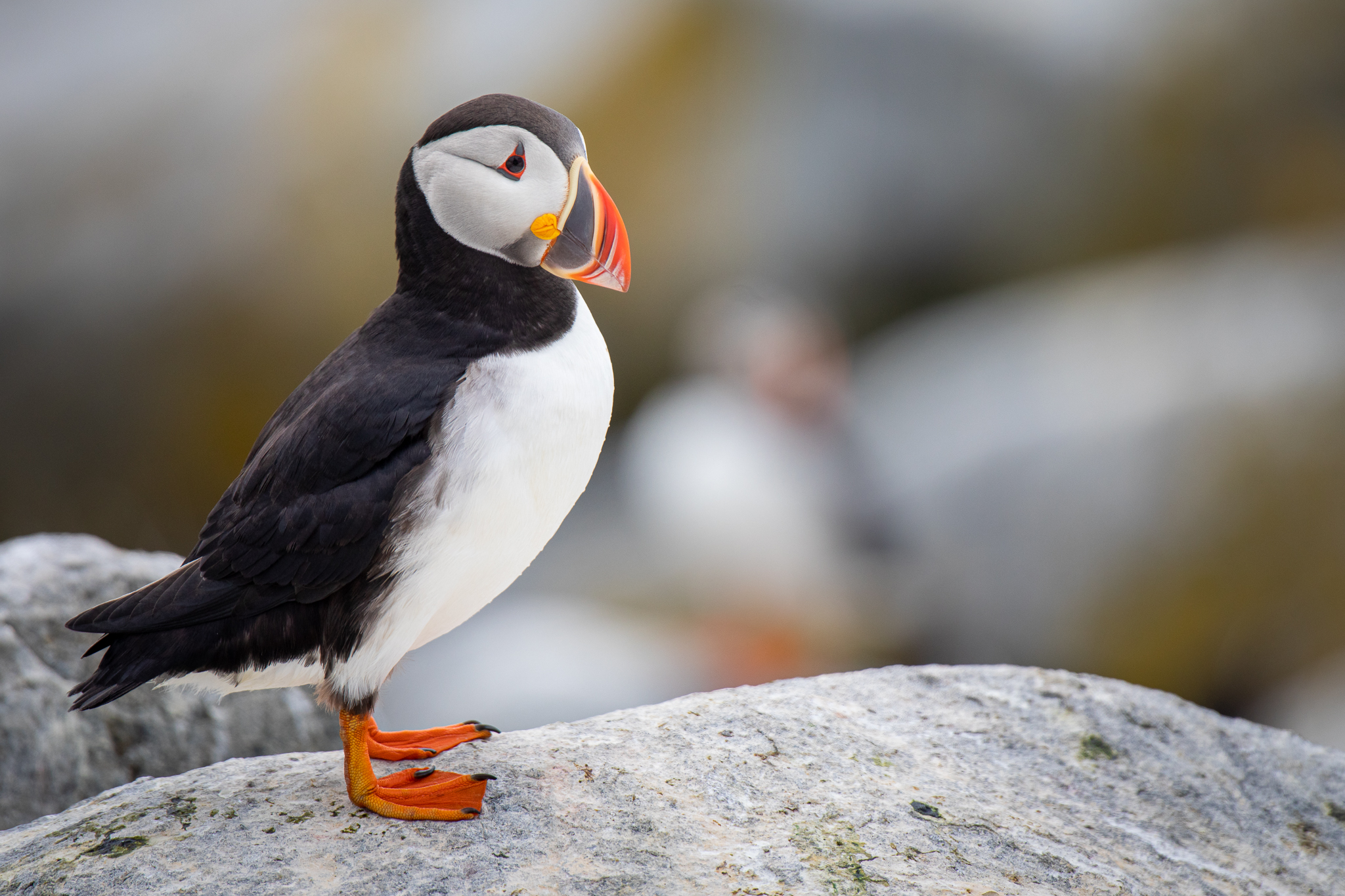 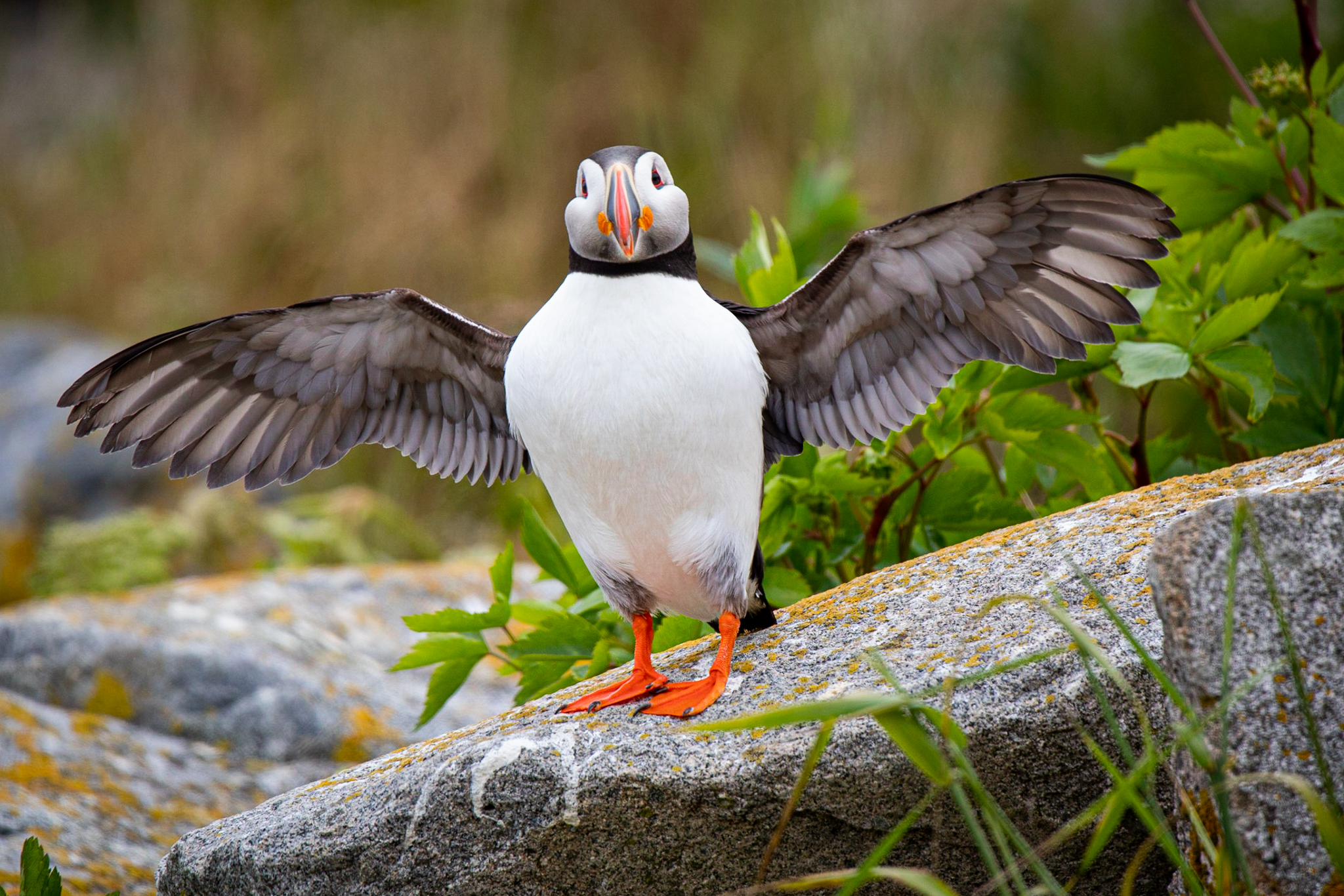 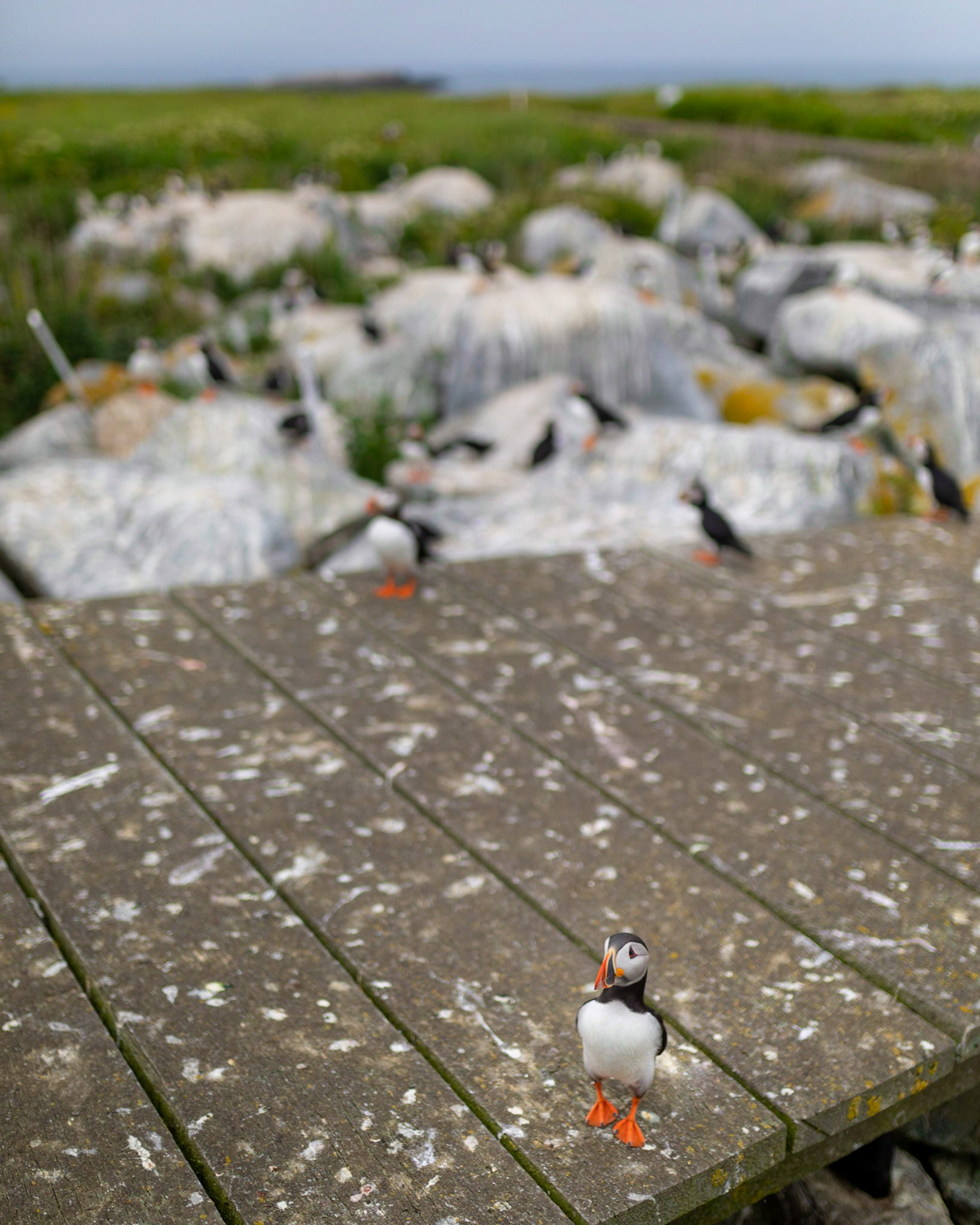 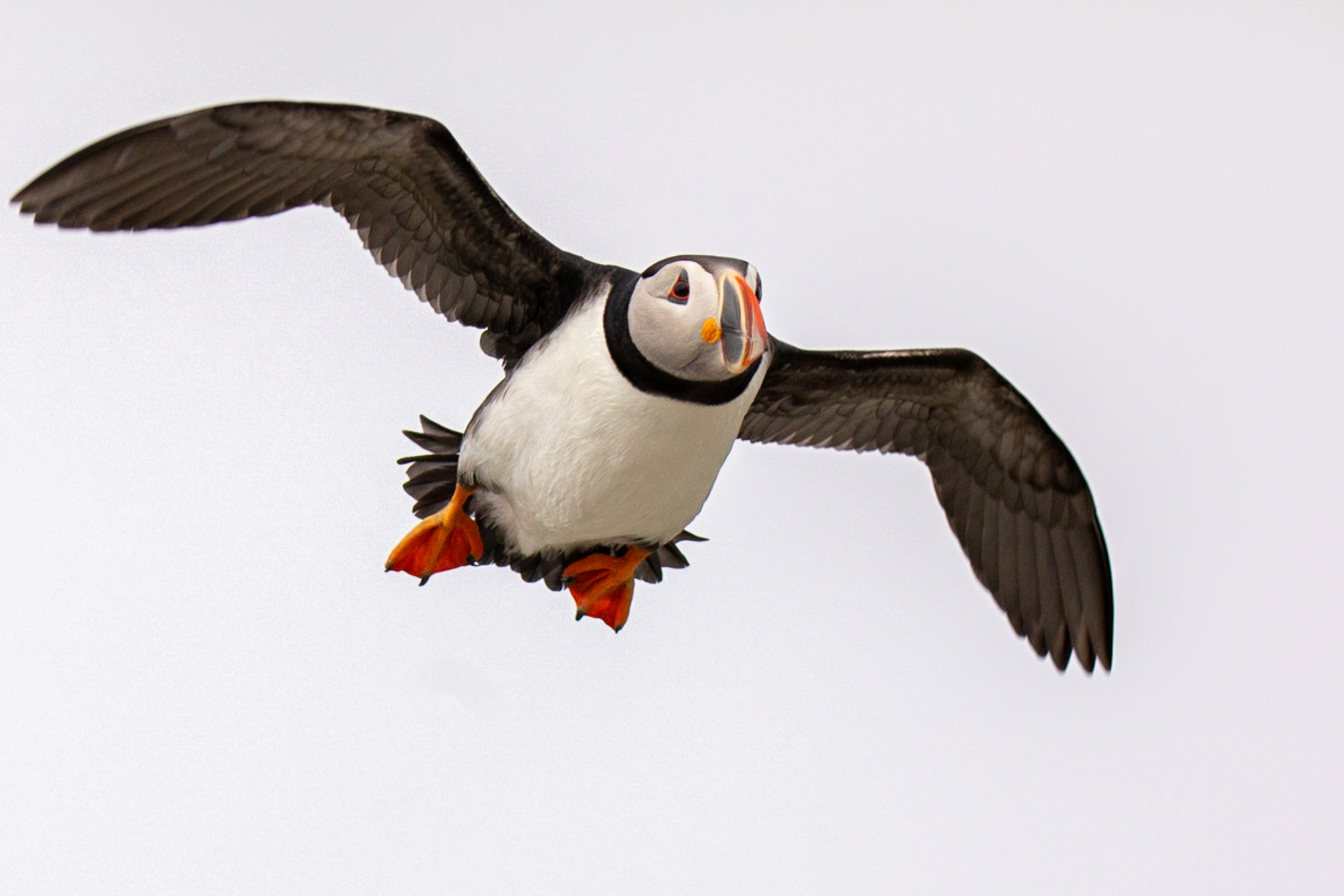 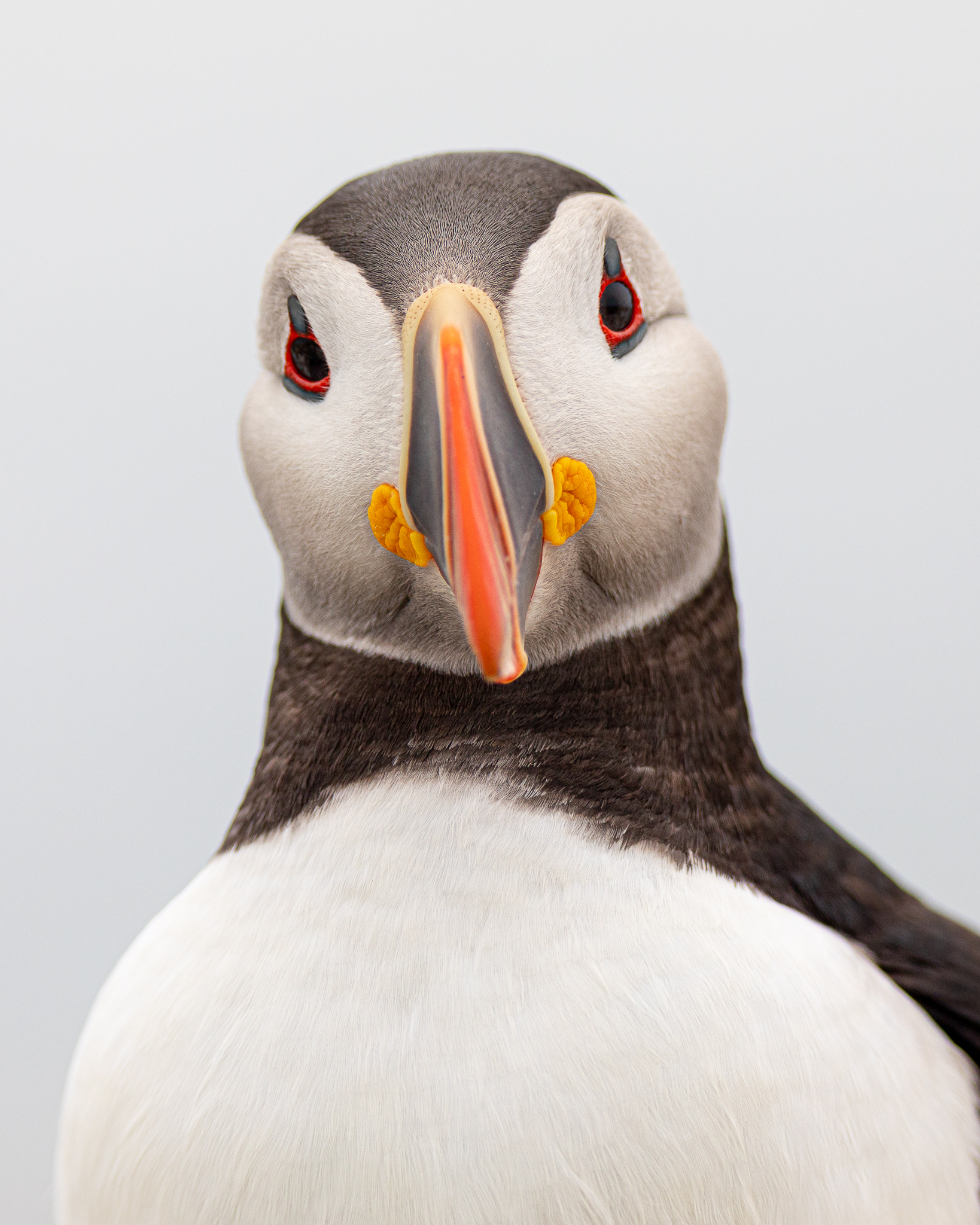 They call it "Machias SEAL Island" for good reason. A seal colony lives nearby, on North Rock. So just after leaving Machias Seal Island, we took a short detour to go around North Rock to see the seals.

The size of the seal colony depends on the season. There were easily a couple hundred seals on the day I went. I wish we could have stayed to watch them a little longer, they were so fun to photograph and the rocks they were hanging out on were colourful and full of great texture.

North Rock is an even smaller island, located just near Machias Seal Island. All it is, is a large rock that sticks out of the water with a big tall navigational light on it. 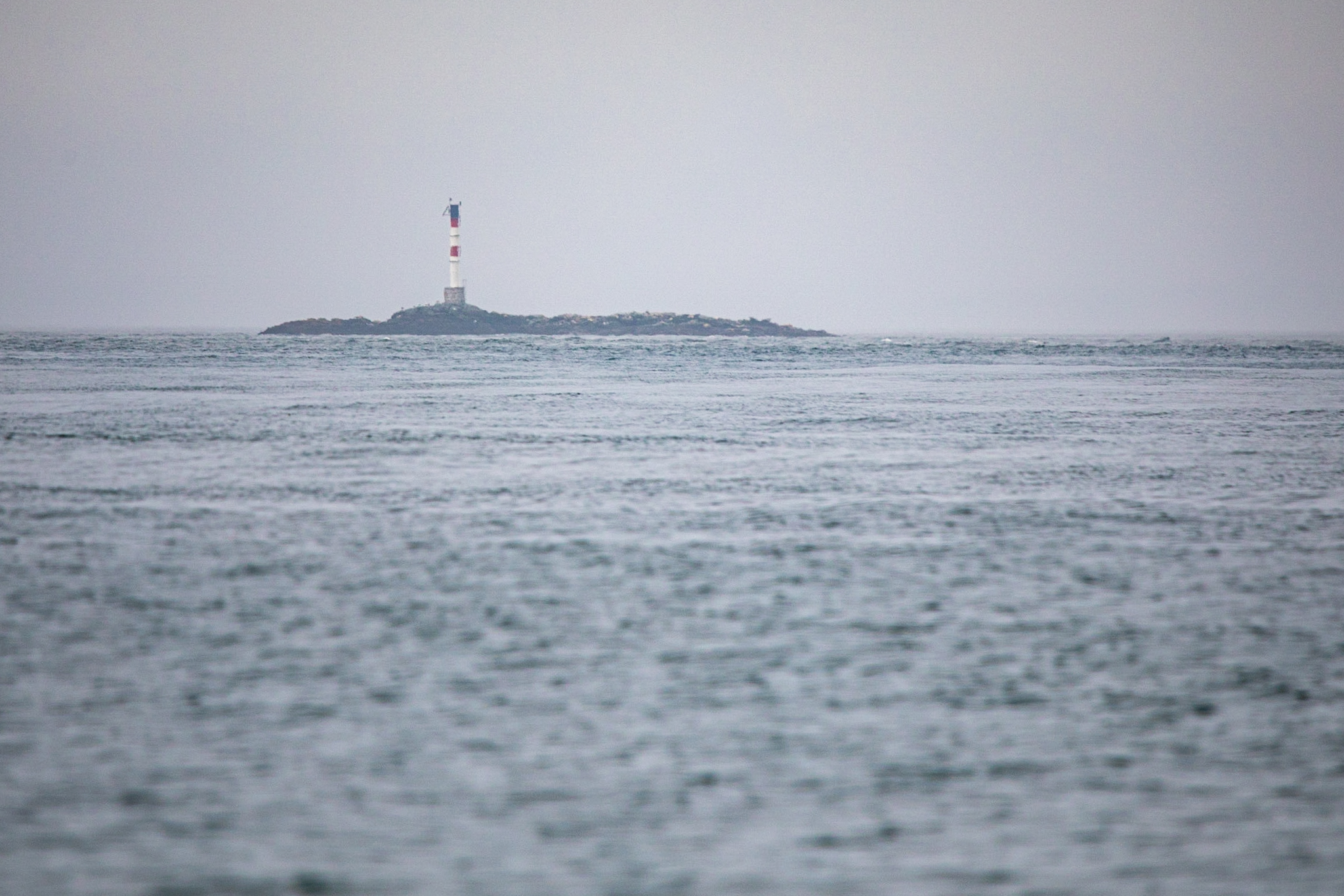 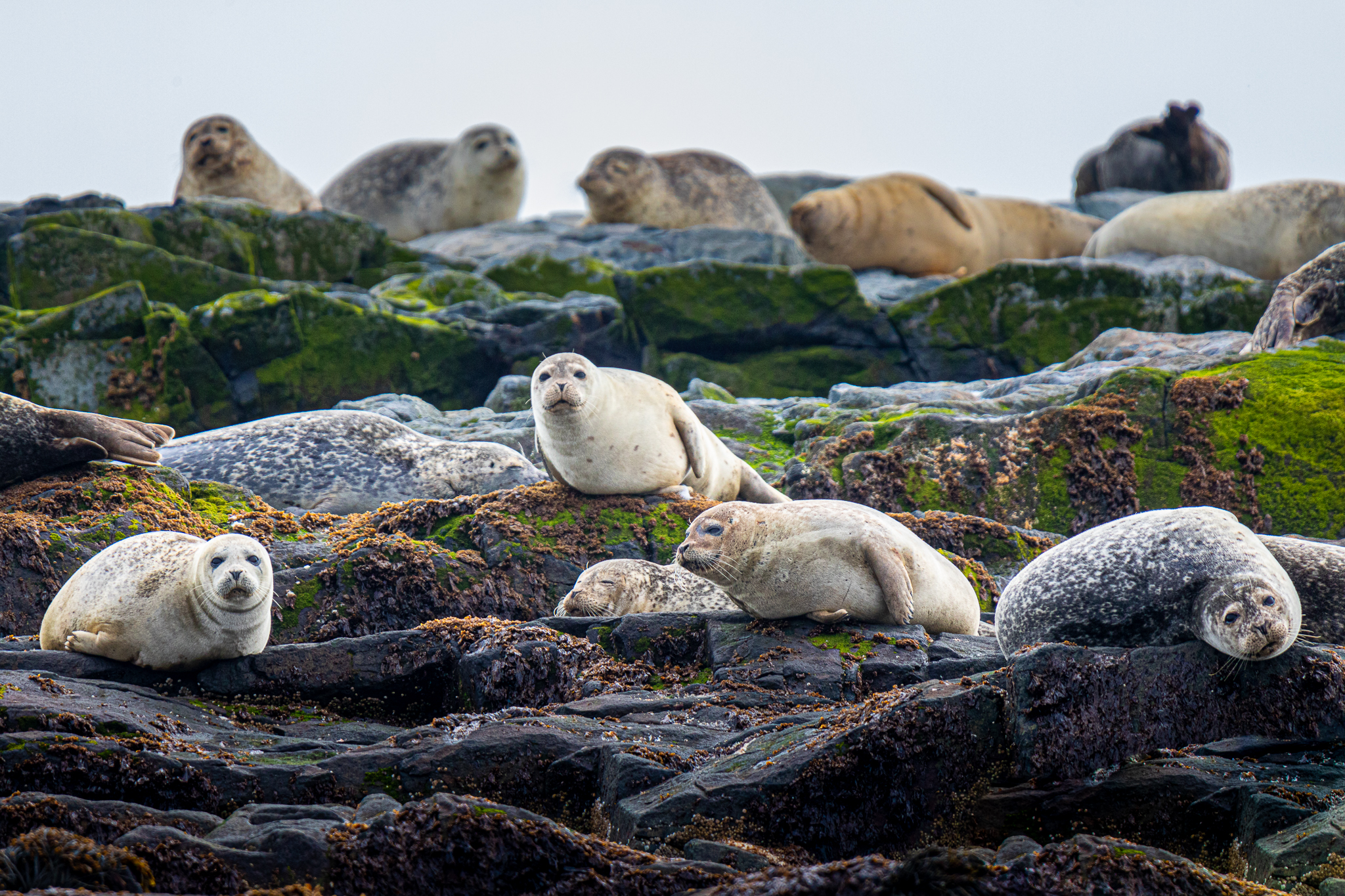 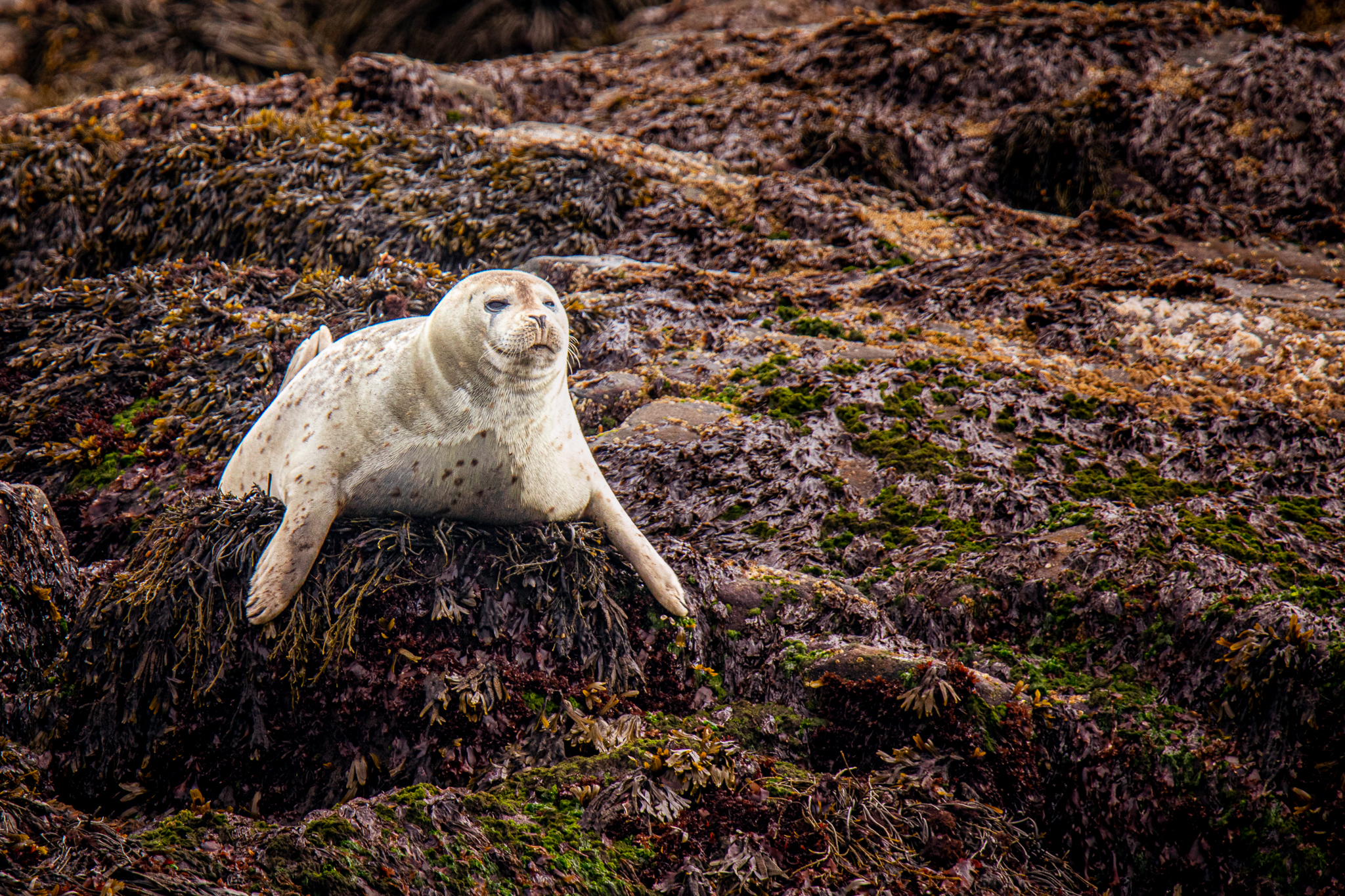 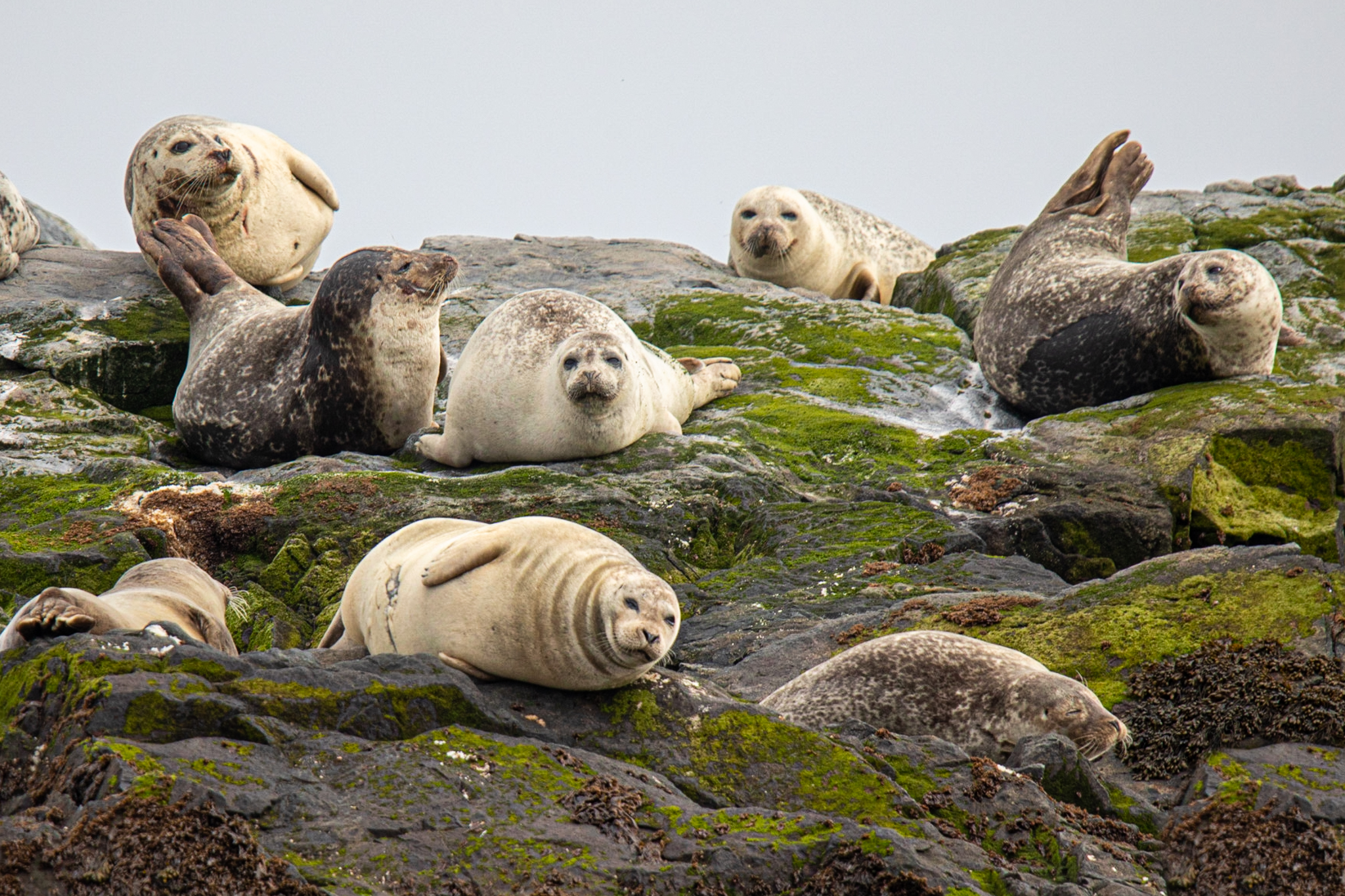 I absolutely loved going on this trip and will certainly make the trip again at some point. I have a few tips for those who would like to try this experience: